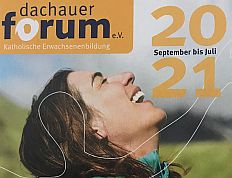 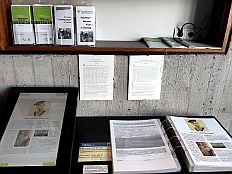 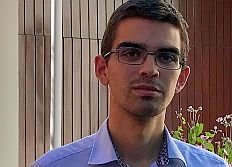 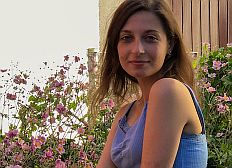 „Over the course of 8 months I have written a biography about Carla Gastkemper. She was a remarkable woman with a strong sense of humor who celebrated life. But also someone who hid her memories of the war for a long time.

Carla was born in 1925 in Amsterdam. She became involved in the Dutch resistance because of her boyfriend, Carel Gerrit Bos. He initiated a route from The Netherlands to Switzerland. His resistance group transported information about the German warfare to Switzerland and brought back information for the resistance in Holland. Carla was given the task of bringing a pistol to Utrecht, but it never got that far. She was arrested at the end of July in 1944, at the age of 19. The rest of the resistance group was arrested as well. She was imprisoned in Haaren and was later brought to concentration camp Vught. One or two days after arriving there, Carla left The Netherlands and was transported to Ravensbrück. Ravensbrück had already exceeded its capacity, so Carla found herself in a camp that was not sufficient for the large number of prisoners. That meant that she had to live under extremely poor conditions. After two months, Carla got an opportunity to leave the camp. The SS was looking for labor commandos and Carla signed up. She managed to be selected to work in a subcamp of Dachau known as AGFA-Kamerawerke, where she performed forced labor in a factory. In the first three months, Carla was very sick. She was hospitalized in the sickbay which gave her the chance of evading the forced labor for a while. After she was discharged from the sickbay, she could participate into the daily routine in the camp again. I would like to quote a part of a song that the Dutch woman used to sing while walking to the factory:

In Munich is a subcamp,
It belongs to a factory,
The residents are skinny,
Half of them is deadly sick,
They sleep on hard beds,
And moan in pain,
But we couldn’t give a damn,
They will not get us down,

Because of the approaching allies, the women were forced to go on a death march. Eventually, the women were liberated by the American army in Wolfratshausen. Once Carla was back home, in June 1945, she still did not know where her boyfriend was. Only much later she heard that he had been executed in Vught, when she herself was there too. On this day, which later became known as ‘Mad Tuesday’, everyone in the camp thought that the Allies were approaching, because of the sound of gunshots just outside the camp. Euphoria was in the air. The women thought to be hearing their freedom, but in reality Carla’s boyfriend was executed, amongst a lot of other men. This has made a big and lasting impact on her life.

When I was just about to interview Carla, I got the devastating news that she had passed away, and therefore I was not able to speak to her -in person- about her camp history. Carla’s daughter, Kathleen, was willing to help me with writing her mother’s story down.

Kathleen could tell me a lot about how Carla was as a person, how she was within her family and how she dealt with the memories from the camp. Carla had lost control over her freedom in the war and was not willing to let that happen again. So she suppressed her memories and she started over by celebrating life.

To me, Carla’s death emphasizes the importance of writing down stories and preserving memories regarding the Second World War. There are not much people left that can tell their experiences about the war, so other people should write their stories down and pass them on.

I am grateful to have done this for Carla. I would like to thank Kathleen for showing me so frankly what kind of person her mother had been. Carla was never ‘just’ a number, even though the Nazi’s believed her to be. She was and is a person, with a name.