An International Interest in the Remembrance Book

James Parisi, Vice President of the Teachers Union of Rhode Island, shows interest in the Remembrance Book during his visit to the Concentration Camp Memorial Dachau. 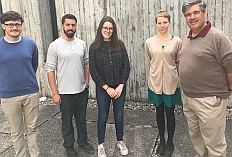 Parisi visited the Memorial Site on the 5th of October, 2017 with his son and son-in-law. At the request of the BLLV Regional Manager, Dieter Reithmeier, the Dachauer Forum organized an English speaking tour for the group. Also on the tour were the new ASRP Remembrance Book  volunteers, Beata and Maja. They used this opportunity to share information about their work with the Remembrance Book’s temporary exhibit “Names Instead of Numbers”. There is an English version of the exhibition, which was last displayed in the USA at the Los Angeles Museum of the Holocaust.

Parisi took great interest in the subject of remeberance, earlier in the week he also visited the Munich Documentation Center for the History of National Socialism.