Exhibition „Names instead of Numbers“ in school 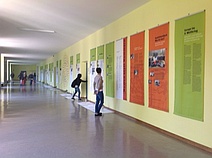 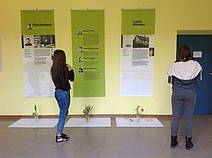 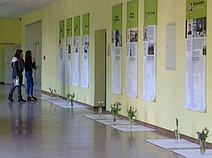 Every two years, the „Städtische Berufsfachschule für Kinderpflege“ in Munich shows the exhibition „Names instead of Numbers“. Roswitha Röll, one of the teachers at the school, explains how the exhibition is used in lessons and what sort of reactions the exhibition banners prompt in those who see them.

„Die Städtische Berufsfachschule für Kinderpflege” a school which trains childcare workers and a socalled „school  against racism and for civil courage“, confronts its students with the history of National Socialism as part of their studies. All year elevens spend a day at the Max Mannheimer Study Centre, focusing on topics they have chosen themselves. They work in small groups and pay particular attention to how those topics impact the present. They also visit the Dachau Concentration Camp Memorial Site.

Every two years, the school plays host to the exhibition „Names Instead of Numbers“. The banners hang in a long corridor. In front of each banner is a large piece of white construction paper with a vase standing on it. The vase is empty to begin with.

The students visit the exhibition and, working in pairs, choose a person from those shown. Drawing upon the further information available to them in the person’s full Remembrance Book page, they begin to work with the biography in some depth.

They try to visualize the person’s life from their birth onward up to and beyond the liberation of the Dachau Concentration Camp. They try to recognise both pleasant and difficult times. Through a presentation, they present a fuller biography of their chosen person and give reasons for their choice. They attempt to answer the questions “What made this persons who they were? How did they react to and deal with what happened to them?  What can I learn from this person’s fate and how can they be an example to me today?”

During the fortnight the exhibition hangs in the school, the students take over responsibility for ‘their’ former prisoner. They ensure that the vases contain fresh flowers or branches. Often drawings or thoughts are sketched out upon the construction paper. The students also enact Jewish mourning rituals such as the laying down of pebbles.

While the exhibition hangs in the corridor, a particular atmosphere surrounds it.  Spontaneous conversations often take place in front of the banners, usually between students, but also with faculty members. For example, students talk about members of their own families who were incarcerated in Dachau. The students’ awareness, that as childcare workers they will become role models for children of all ages, from infants to teenagers, is heightened.

To begin with, students often have to overcome their own qualms about studying the topic. Soon enough, however, they become involved and come to recognise that the topic is as highly charged today as it was then. They learn the importance of resisting radicalism and how such resistance is the duty and responsibility of individuals. The students realise that their own attitudes can help prevent something so horrific from ever happening again.

The gallery shows the first opening of the exhibition in this school on mai 4th, 2010. Some survivors attended, amongst others Pjotr Kudin (30), Mussij Halajko (52) and Wassyl Wolodko.